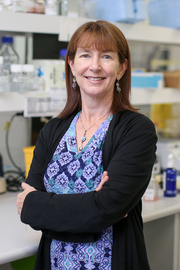 The ribonucleoprotein enzyme telomerase counteracts telomere shortening in a majority of cancers, allowing for unlimited cell division. Most normal cells do not express telomerase, so inhibition of telomerase is a promising avenue for development of specific anti-cancer treatments. Telomerase action can be inhibited in vivo by blocking the cellular pathways that direct telomerase to chromosome ends, i.e. telomerase ‘recruitment' to telomeres. This process is highly regulated, but factors that regulate it are incompletely understood. We have demonstrated that the recruitment of telomerase to telomeres is controlled by the pathways that regulate the cellular response to DNA damage. This project will elucidate the mechanistic links between these two vital cellular pathways, using advanced microscopy techniques, genome editing and biochemical analyses.

We have demonstrated that telomerase recruitment to telomeres in human cells is highly dependent on the DNA damage response kinases ATM and ATR (1), that together play a crucial role in safeguarding the genome. This is an unexpected finding, since in general the DNA damage response is suppressed at telomeres, suggesting that telomeres exploit DNA damage signalling pathways to bring telomerase to the telomere. ATR controls the cellular response to single-stranded DNA arising during replication fork stalling, and we also showed that replication stress increases the levels of telomerase at the telomere, in an ATR-dependent manner (1). These observations represent a new understanding of the relationship between telomerase and the DNA damage response: both are key drivers of oncogenesis, and our data demonstrate that they are tightly linked.

We are currently investigating the mechanism of the link between DNA replication stalling and telomerase recruitment to telomeres. We need talented and enthusiastic students to join our team, to follow up these enticing leads and help us explore how cancer cells coordinate DNA replication, DNA damage and telomerase action.

Other ongoing projects in the lab include investigating unexpected functions of telomerase throughout the genome, the mechanism of telomerase action in haematopoietic stem cells, or the role of four-stranded structures (G-quadruplexes) at telomeres. Together we will plan a project that is tailored to your interests and background; techniques used are likely to include live cell imaging and other advanced microscopy techniques, and biochemical and molecular techniques including enzyme activity assays, DNA and RNA binding assays, molecular cloning, CRISPR-mediated gene editing, protein purification and chromatin immunoprecipitation.

This project will be conducted at Children's Medical Research Institute (CMRI) at Westmead, a major research and medical hub in western Sydney. Both PhD and Honours students are encouraged to apply for CMRI scholarships; see https://www.cmri.org.au/Research/For-Students/CMRI-PhD-research-award for details.

Children's Medical Research Institute (CMRI) is an award-winning state-of-the-art medical research facility, with over 100 full-time scientists dedicated to researching the genes and proteins important for health and human development. The CMRI is supported in part by its key fundraiser Jeans for Genes®. Our scientists are internationally recognised research leaders and foster excellence in postgraduate training. CMRI graduates are highly sought after nationally and internationally.


CMRI is located at Westmead, a major hub for research and medicine in NSW, and is affiliated with the University of Sydney. Easy to access by public transport.