Our areas of focus include;

We have incorporated simple but realistic models of physiology into a variety of new, more realistic, network structures to address these questions.

Our models enable the key requirement of network stability to be incorporated, and we have already found that this greatly constrains possible network structures, and hence the types of brain that could be selected for by evolution. The physiological basis of the model enables it to predict experimental observables such as electroencephalographic or functional magnetic resonance imaging (fMRI) measurements. New analysis and characterization methods are also being explored, based on field theory and matrix analysis. Numerous areas exist for PhD, MSc, or Honors projects, which could include theoretical, computational, and/or data-related components in cooperation with our international and local collaborators.

We have developed quantitative, physiologically-based, mathematical models of neural activity and hemodynamics (flow of blood and oxygen) in the brain, both in response to stimuli and in the resting state. We have shown that that these models successfully reproduce a wide range of phenomena, including the recent prediction and experimental confirmation of cortical hemodynamic waves that propagate across the brain after a stimulus.

Numerous areas exist for PhD, MSc, or Honors projects, which could include theoretical, computational, experimental, and/or clinically-related components in cooperation with our collaborators locally and at other universities.

Neural activity in the brain has been observed for over a century and is widely used to probe brain function and disorders, through the electroencephalogram (EEG), electrocorticogram, depth electrodes, functional MRI, and many other measures. However, the connections between stimuli, physiology, processing, and measurements have been chiefly qualitative until recently, and most links between stimuli, activity, function, and measurements have been based on phenomenological correlations.

We have developed a quantitative multiscale model of brain stimulus-activity-measurement dynamics that includes key physiology and anatomy from synapses to the whole brain and from milliseconds up in timescale. With the inclusion of measurement effects, the model successfully predicts a wide range of linear and nonlinear phenomena at many scales. These include time series, spectra, evoked responses to stimuli, seizure dynamics, visual phenomena during perception, arousal (sleep-wake) dynamics, and influences of pharmacology and aging. Fitting to experimental data enables physiological parameters to be inferred in normal and abnormal conditions.

Such multiscale modeling thus provides a framework within which to interrelate, predict, and interpret diverse phenomena and measurements. The physiological basis of the model enables it to predict experimental observables such as electroencephalographic and functional MRI measurements, and the results have given rise to commercial applications. Numerous areas exist for PhD, MSc, or Honors projects, which could include theoretical, computational, and experimental components in cooperation with our international and local collaborators.

Neurophysics: theoretical and computational neuroscience consists of many research strands including: (i) How does the brain compute: Distributed dynamic computation (DDC) in neural circuits; (ii) Spatiotemporal patterns in the brain.

How does the brain compute: Distributed dynamic computation (DDC) in neural circuits

Dr. Gong has proposed a novel theory, the distributed dynamic computation (DDC) theory of neural circuits, to understand how the brain processes information in such an amazingly efficient and flexible way. The conventional theories such as the attractor theory, which are based on the stable states of neural systems, are unable to explain complex spatiotemporal patterns such as propagating wave patterns as widely observed in the brain. In our theory, however, these patterns are essential neural substrates for the brain to carry out distributed computation: information is encoded in spiking wave patterns, information is communicated based on the propagation of these patterns, and information is processed when they interact with each other. 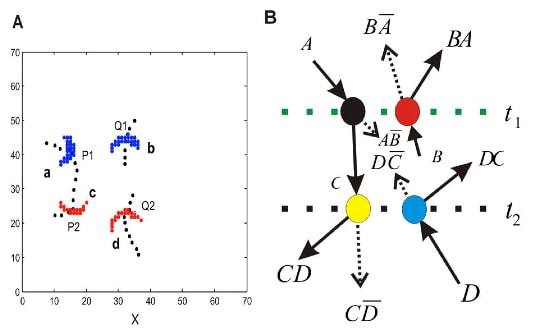 The space-time behaviour of propagating spiking waves and distributed computational operations carried out by the interactions of these propagating waves.

Spatiotemporal patterns in the brain

Recently, Dr. Pulin Gong’s group has successfully developed a new method that is very effective in detecting and characterizing coherent spatiotemporal patterns from large-scale data such as MEA recorded spikes and local field potentials. Based on this method, we have found a richer than expected repertoire of coherent structures; beside the plane waves that have been a subject of recent interests, we have found standing waves that are complemented by waves that radiate out or converge to phase singularities (sink patterns), or spiral around them (spiral waves). Importantly, we can figure out the evolution dynamics of these patterns. Currently, we are investigating the functional nature of these patterns by analysing how they are modulated by external stimuli in the visual cortex of marmosets.

Representations of different types of spatiotemporal pattern from the visual cortex of marmosets.

Additional research areas include: Collective dynamics of spatially extended, spiking neural circuits and Models of working memory and associative memory. One of our papers (Palmer and Gong, 2013) is a cover article of Neural Computation.

Humans spend one third of their lives sleeping, and yet only now we are starting to understand why we need to sleep and what are the mechanisms of sleep. Lack of sleep leads to poor performance, risk of accidents, and, in severe cases, disease. Disturbances of sleep and circadian system as appear during shiftwork are particularly dangerous due to their chronic nature, and have been linked to double the rate of accidents and increased risks of diabetes, cardiovascular disease, and cancer. Our key interests in sleep research are to (i) improve understanding of the brain dynamics controlling sleep, (ii) develop interventions reducing sleep and circadian disturbances, and (iii) predict alertness during normal and disturbed sleep-wake cycles.

We have developed the first model of the brainstem ascending arousal system in the brain that governs sleep and wake, and have successfully reproduced a range of normal and sleep-deprived behaviors, including the effects of pharmacological agents (e.g., caffeine, modafinil). To enable study of the circadian disturbances we combined this model with a model of a light-driven circadian oscillator and now address such issues as sleepiness and adaptation during jet lag and shift work (also see www.sleepsim.com). We also study EEG dynamics during sleep and have employed the group’s highly successful EEG-generation model to predict sleep-wake signatures in the EEG.

Numerous areas exist for PhD, MSc, or Honors projects, which could include theoretical, computational, experimental, and/or clinical components in cooperation with our collaborators at the Woolcock Institute for Medical Research, the Brain and Mind Research Institute, and elsewhere.
The group now plays a major role in two sleep and alertness research centers: