Investigating molecular materials
Share
We perform research into advanced functional materials, utilising a wide range of cutting-edge techniques. Primarily, we concentrate on the design and properties of metal-organic frameworks (MOFs).

We use single crystal X-ray, powder X-ray and neutron crystallography, PPMS magnetometry, and numerous gravimetric and gas sorption techniques to fully characterise the large range of physical properties that can be attained in these classes of materials.

The Kepert group represents one component of the wider Molecular Materials Group in the School of Chemistry - please visit the pages of the D'Alessandro Group to find out more.

Coordination frameworks, also referred to as coordination polymers, are crystalline networks of metal ions, or metal ion clusters, coordinatively linked via molecular ligands that contain two or more metal binding sites. The combination of metal ions possessing well defined coordination geometries with an extensive selection of molecular bridging ligands, allows for immense customisation in these frameworks. This can give rise to a number of attractive structure-related properties, including controlling pore environments for gas separation and storage, tuning spin crossover as a function of host-guest interactions, and anomalous thermal expansion behaviour as a result of structural flexibility.

The spin crossover framework SCOF-3 showing a change in the powder diffraction pattern with solvent uptake.

As a consequence of ligand size and bonding directionality, these materials often form frameworks that have the ability to support extensive microporous voids capable of reversible host-guest interactions. These materials may also exist in interpenetrated forms, where one or more identical (yet independent) frameworks fill the available pore space. Differences in synthetic methods can often result in either a single or interpenetrated network. Robson et al. demonstrated that interpenetration could be avoided by creating a charged framework that required the accommodation of additional counterions in order to maintain charge balance. As such, the presence of the bulky counterion within the network cage could prevent interpenetrating networks from forming, thus yielding a single-network material with significant pore space upon substitution of the counterion with a smaller one.

By understanding the factors contributing to a framework's porosity, materials containing some of the largest reported pore volumes have been synthesised. As such, these coordination frameworks have become increasingly popular candidates in gas capture applications, such as hydrogen fuel storage and carbon dioxide capture/catalysis. Whilst large pore volume is a seemingly attractive feature for gas capture applications, studies have found that frameworks with reduced pore dimensions are able to maximise the interaction between the framework and adsorbent, consequently obtaining similar gas uptake values to those of ultra-porous frameworks.

Ultimately, it is the ability to infinitely and rationally modify the components of coordination frameworks that makes them appealing candidates for use in a variety of technological applications. Therefore, attaining an extensive understanding of the relationship between structure and function will allow for improved rational design, further enhancing their desired functions.

The majority of materials expand upon heating, which can have a detrimental effect on sensitive devices where precise alignment is required when working with variable temperatures. Materials that exhibit negative thermal expansion (NTE) can be of great benefit in these devices, such that carefully matched components can result in neither expansion or contraction. Another useful class of meterials, although less common, are those with zero thermal expansion (ZTE). As the name suggests, these materials neither expand nor contract upon heating.
As materials are heated, thermal energy populates vibrational states of the components and of the material as a whole. In most materials, the increased vibration leads to the increase of bond lengths, causing expansion. However, in some materials certain vibrational modes can lead to a decrease in the distance between two groups linked by a vibrating bridge. A common example is the 'skipping rope' vibrational mode in metal cyanide frameworks, such as Prussian Blues.

Other compounds also show NTE through different vibrational modes in more complex systems, such as MOF-5. A recent publication from our group elucidates the effects of each of the vibrational modes of the benzenedicarboxylate linker and of its interactions with the Zn4O cluster. 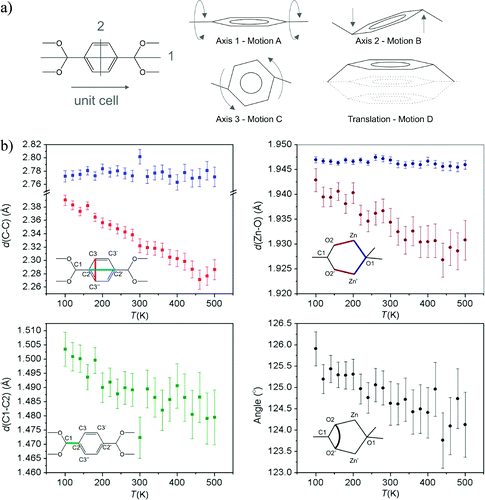 Vibrational modes of MOF-5: a) Sketches of possible simple motions of the benzene ring: rotation around the three principle axes of the benzene ring and a translational up-and-down motion. Axes 1 and 2 are sketched on the left-hand figure. Axis 3 is perpendicular to axes 1 and 2. The translational motion and rotation around axis 2 can be viewed as in-phase and out-of-phase transverse vibrational motions, respectively. b) Temperature-dependent atomic distances and angles derived from the SCXRD data. Upper left: d(C2-C2') (blue squares) and d(C3-C3'') (red squares); lower left: d(C1-C2); upper right: d(Zn-O1) (dark blue circles) and d(Zn-O2) (dark red circles); lower right: O2-C1-O2' angle (black circles). 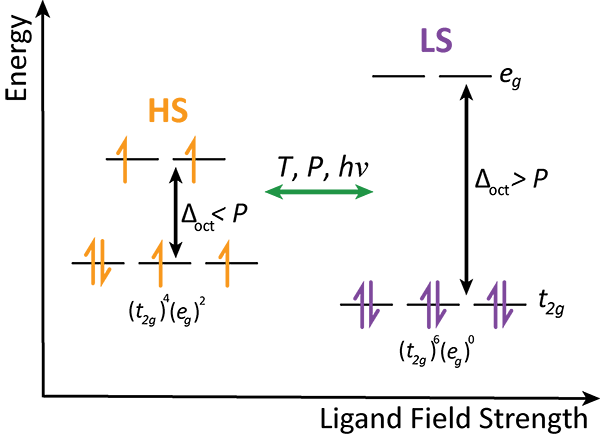 Nanoporous molecular framework materials have received widespread attention due to their immensely rich host-guest chemistry and exceptional chemical versatility. The field has undergone extensive advancement in recent years with efforts to design framework materials with very specific functions and properties. The incorporation of spin crossover (SCO) centres into such framework structures opens the question of whether molecular guests may be encapsulated into these materials, and whether the reversible exchange of these guests may provide a novel mechanism to perturb the electronic switching properties (and vice versa). Magnetic studies, thermogravimetric analysis, X-ray and neutron diffraction, photomagnetic studies, guest sorption studies, IR and RAMAN spectroscopy are but a few of the techniques being used to elucidate the guest-uptake and guest-dependant SCO properties of such materials.

SCO may be accompanied by drastic changes in colour, magnetism or structure and thus materials displaying such behaviour may have applications in optical displays, molecular sensing, and data storage. Nanoporous framework materials are valuable to study due to their intrinsic ability to combine two or even three properties of interest in the one multi-functional material. Further to this, the interplay between such properties opens up interesting research prospects.

The research avenue of multi-functional materials allows for potential applications in many areas. For example, it can be envisaged that SCO materials may be used for information storage and as optical and magnetic components. Combining SCO functionality and nanoporosity allows the ability to tune the material (using host-guest chemistry) for these functions, as well as opening up new applications in molecular sensing.

The Molecular Materials group has access to some of the most advanced characterisation facilities in Australia, allowing us to probe the nature and properties of the materials we synthesise.