Stroke is one of the leading causes of death and disability in the western world. Recently ‘clot-busting’ thrombolytic drugs have become available for when the stroke is associated with a blockage or ischaemia, however bleeding or haemorrhage must be excluded before therapy can commence. To assess new treatments and manage dosage of thrombolytic drugs, a device to continuously monitor bleeding in the brain would be a great advantage.

Electrical impedance tomography (EIT) is a relatively new imaging method that traditionally uses a ring of external electrodes to image impedance changes in 2D within the body. The technology is currently available for clinical application for pulmonary ventilation monitoring and we have developed methods to allow detection of perfusion in the lungs. There is also clinical need to image the heart in intensive care, but physicians find echocardiograms difficult due to the presence of bone and the ventilated state of the lungs. The resolution of EIT is limited by the number of measurements, electrode location and the 2D nature of acquisition.

For providing the optimum information on cardiac function it is important to measure a sufficient number of frames within a single cardiac cycle. This project aims to increase the measurement speed, use of internal electrodes and other methods to improve image resolution.

There is an urgent clinical need to develop diagnostic devices to assess the health of newborn babies. While the care and survival of newborns is constantly improving, brain damage from bleeding or haemorrhage is still common in preterm infants and can lead to poor neurodevelopmental outcomes, including cerebral palsy. In the developing world, the World Health Organization estimates that malnutrition contributes to more than half of child deaths, and has called for a low-cost device to measure malnutrition.

In collaboration with the newborn care unit (NICU) at Westmead Hospital, we have developed an improved detection of intraventricular haemorrhage. By using signal processing and data analytics of blood pressure we were able to predict the onset of bleeding within 10 minutes which can potentially provide the caregivers with more time to adjust treatment and reduce the risk of severity of brain injury.

Low fat composition in newborns exposes them to an immediate risk of increased mortality and morbidity, and to diabetes and obesity diseases in later life. We have also developed a portable and easy-to-use device that uses light to measure the amount of fat under the skin so that infants don't need to be placed in a scanner or have a skin pinch test. The device can be made inexpensively with only five sensors and the length or height of the infant does not need to be measured, avoiding a difficult measurement of infants who wriggle and protest at being held flat.

The device will enable health workers trying to identify malnourished infants and monitor changes in the nutritional status of an infant who has received interventions. We are working alongside the University of Oxford’s INTERBIO-21st study to test their prototype device for suitability in different skin tones and in large communities in Africa.

The next generation of cochlear implants for the deaf

Our biomedical engineers are working closely with engineers at Cochlear and a team of clinicians to make cochlear implants and other implantable bionic devices smaller, more effective and more readily implanted. The objective is to usher in new designs, fabrication techniques and biomaterials that will help advance Australia’s world-renowned position in this important field of medical treatment.

Phoenix99 bionic eye system for the treatment of blindness

We aim to restore sight to the blind through electrical stimulation of nerves inside the retina – an approach akin to the way that cochlear implants provide an effective treatment of deafness. Over time we have amassed considerable expertise in this area of research and we are internationally recognised leaders in the burgeoning field of bionic eyes.

Realising the promise in this new technology and the potential of the team to bring it to fruition, the Australian Government provided $50 million from 2010–14 to support the development of a bionic eye for the blind. Following this, the National Health and Medical Research Council has provided funding for this pioneering work to reach the clinic.

The outcomes of this important initiative have exceeded expectations. The unique approach of placing a stimulating electrode into a particular location within the eye known as the supra-choroidal space defied many critics. It was shown to be effective in allowing three blind people with advanced cases of a disease known as retinitis pigmentosa (RP) to see spots of light called ‘phosphenes’ when implanted with an early prototype array connected to external electronics. The phosphenes could be arranged to form patterned vision that exchanged darkness for light, and essentially brought blind eyes back to life.

The next steps will see the fabrication and testing of a fully implantable device that significantly increases the number of stimulation channels for improved patterned vision. This device is called the Phoenix 99 Bionic Eye System and is currently undergoing its pre-clinical testing. 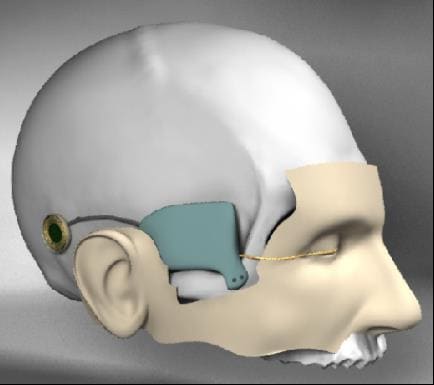 We are working to develop an implantable device to serve as a therapeutic treatment to facial nerve paralysis (FNP). Patients with FNP are unable to close their eyelid, most commonly on one eye only. Eyelid closure failures can result in corneal ulcers and may ultimately lead to blindness, in addition to the significant social challenges associated with this highly-conspicuous disability.

The desired solution will detect the closure of the functional eyelid and initiate closure of the paralysed eyelid in a natural motion that hydrates the cornea and manages the issues relating to cosmesis. A multi-faceted project called BLINC (Bionic Lid Implant for Natural Closure) includes research and development of an implantable actuator, a surgically-implanted ‘sling’, externally-supplied power and triggering system, and a network of smart sensors to synchronise the eye closure with the contralateral, healthy eye.

The enabling technologies will underpin new and improved applications of in-vivo imaging in animals and humans via highly interdisciplinary projects involving physics, engineering and robotics, computer modelling, algorithm design and animal models. Our ultimate goal is to translate the discoveries we make in the laboratory into improved clinical understanding and treatment of debilitating diseases affecting the brain and mind.

The aim of this project theme is to develop motion-compensated neuroimaging capability, allowing human and animal subjects to move, behave and respond during brain imaging without in any way degrading the quality of information obtained.

Current neuroimaging technologies require the subject to be in an unnatural or unresponsive state to prevent motion-induced artifacts that render the image uninterpretable. Consequently, there is no practical method for imaging the entire brain of a freely moving subject as it responds to changes in its environment. This critical technology gap is stifling progress in understanding the biological mechanisms underpinning mood disorders, drug addiction and deficits in learning, motor function and speech.

Our team is developing a new generation of positron emission tomography (PET) scanner that is specifically tailored for accurate quantification of biological processes in the brains of freely moving mice. This requires completely new technologies for PET detection, motion tracking and data processing. The scanner we develop will enable us to exploit a previously impossible class of experiments to probe the link between brain function and behaviour.

We are applying machine learning to problems in biomedical signal processing. Applications include detection of freezing of gait in people with Parkinson’s disease, removal of outliers in lung function tests and detection of cardiac arrhythmias. In particular, we are researching how salient features can be selected using conventional and deep neural network approaches.