The largest collection of antiquities in the Southern Hemisphere
Share
More than 30,000 artefacts of artistic and archaeological significance from Egypt, Greece, Italy, Cyprus and the Middle East.

The Nicholson Collection contains more than 30,000 artefacts representing ancient cultures from the Mediterranean, Middle East and Europe. They span the early Stone Age to late medieval times. These objects have intimate stories to tell about people’s everyday lives and their beliefs from the ancient world.

The collection was founded in 1860 by Sir Charles Nicholson (Provost 1854–62) when he donated more than 3000 artefacts from Egypt and Italy for teaching and research. Since then, the collection has expanded through ambitious acquisition programs, generous donations and private bequests.

International excavations in Egypt, Cyprus and the Middle East, partly sponsored by the University of Sydney, have uncovered other significant objects. Key excavations include those at the archaeological sites of Jericho in the West Bank and Amarna and Bubastis in Egypt. The Nicholson Collection has also supported archaeological projects by Australian researchers and students at sites such as Pella in Jordan, and Myrtou-Pigadhes and Nea Paphos in Cyprus.

Today, the Nicholson Collection constitutes the most extensive collection of antiquities in the southern hemisphere. It is a unique resource for teaching, research and public display. The collection is available to anyone seeking to understand how these ancient cultures shaped our modern societies. 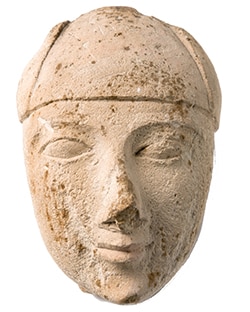 The Nicholson Collection holds the largest and most significant collection of Cypriot antiquities in Australia. This collection spans the neolithic to Roman and medieval periods and includes a range of artefact types from artistic ceramic vessels to intriguing sculptural works, glasswork and bronzes.

Beginning in 1860 with a single artefact from the original donation by Sir Charles Nicholson, the collection grew exponentially, especially under the curatorial direction of William J Woodhouse (honorary curator 1903–38) and James Stewart (honorary curator 1954–62).

Many of the artefacts within the collection were sourced directly from Stewart's excavations conducted at Bellapais Vounous, Karmi Palealona, Karmi Lapasta, Nicosia Ayia Paraskevi and Vasilia Kafkallia. They also came from the excavations of the sites of Myrtou Stephania and Myrtou Sphagion, conducted by Stewart's former student, Basil Hennessy, who later became Professor of Near Eastern Archaeology at the University of Sydney.

The collection holds many complete tomb groups of archaeological importance. This collection continues to grow through generous donations and benefactions from private individuals. Hathor depicted on red granite column capital from the Temple of Bubastis, c.900 BC

The collection of Egyptian artefacts in the Nicholson Collection is the largest and most important in Australia. It includes objects representing ancient Egyptian history from the neolithic to the late Roman period, with mummies, monumental sculpture, inscriptions and ancient organic materials contributing to the unique nature of this collection.

The core of the collection began in 1856–57 when Sir Charles Nicholson travelled down the Nile acquiring artefacts of artistic and archaeological importance from dealers and at sites. Most of these objects were shipped to Sydney via England, where they were assessed by Joseph Bonomi of the British Museum. In 1860, they were donated by Nicholson to the University’s new Museum of Antiquities.

The Egyptian collection expanded during the late 19th and early 20th centuries through the acquisition of objects from the Egypt Exploration Fund (now Society) in London, in return for an annual subscription. Some objects, such as the 3.4 metric tonne Hathor capital pictured right, were considerably more difficult to transport than others.

Many of the artefacts came directly from the excavations conducted by Sir Flinders Petrie, a pioneer in modern archaeology. Today, the collection includes artefacts from well-known archaeological sites across Egypt including Abydos, Alexandria, Bubastis, Fayum, Heliopolis, Memphis, Saqqara and Thebes. 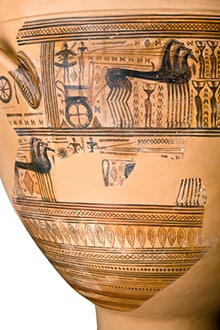 Our Greek collections contain artefacts representative of the material culture of the Greek mainland, islands and surrounding regions, from the Bronze Age to the Late Hellenistic period. Although our wide range of ceramic vessels are the cornerstone of this collection, bronze and terracotta figurines, marble sculpture, rich jewellery items and numismatic objects contribute to its diversity.

During Sir Charles Nicholson's travels to Egypt and Europe in 1856–58, he acquired, primarily in Rome, a range of Classical and Hellenistic Greek ceramics as well as terracotta figurines. In total more than 70 significant Greek artefacts were included in the founding donation of the Nicholson Museum

Further material, representative of the Greek mainland and islands, was purchased during the curatorship of Professor Arthur Dale Trendall. His proactive acquisition program involved purchasing a wide range of ceramic types of Greek origin as well as significant contributions of sherd material for teaching purposes sought from prominent museums and individual collectors and scholars, including Sir John Beazley.

The collection was then expanded following a donation of hundreds of pottery fragments and small votive objects by the family of former curator William J Woodhouse in 1948. The majority of this material is thought to have been collected during Woodhouse's trips to Greece in the 1890s and 1930s, documented in the Woodhouse photographic collection. Most recent additions to this collection have come through generous benefactions and individual gifts to the Nicholson Collection.

Our Italian collection represents the diversity of the ancient Italian world with significant cultural material from Etruria, South Italy and the Roman World. The first millennium BC was a time of diversity and constant cultural change in the Italian region resulting in spectacularly varied material culture across the peninsula and is the foundation for the iconic Roman Imperial traditions.

The Italian collection is further enriched by the Roman period artefacts incorporated into the collections from Egypt, Cyprus and the Near East. These provide a unique overview of the far-reaching influences of the Roman Empire from the first century AD into the Byzantine period. Our collection of Middle Eastern artefacts represents many of the great cities and civilisations that flourished along the Levantine coast, across Mesopotamia and along the Indus Valley. The collection spans centuries of culture from the Prehistoric Natufian period to the Roman era.

The Middle Eastern collection began with a handful of artefacts from Ur, donated by the British Museum in 1926. This was greatly expanded in the mid-20th century by the acquisition program of program of the curator Arthur Dale Trendall, and his successor Professor James Stewart. Both curators wrote countless letters to museums and government agencies around the world requesting representative samples of artefacts to ensure the Nicholson Museum’s holdings reflected the diversity of this expansive region.

The University of Sydney also contributed financially to archaeological excavations and projects in the Middle East, most notably Dame Kathleen Kenyon’s excavations at Jericho. In return for the University's support, the Nicholson Museum received a consignment of objects at the end of each season, including full tomb groups from the Bronze Age and rare finds such as our neolithic plastered skull.

Other items have been acquired through generous donations of individual archaeologists, including Sir Leonard Woolley and Sir Flinders Petrie, as well as from archaeological institutes, museums and private donors.

The Nicholson Collection is now on display at the Chau Chak Wing Museum, open to the public 18 November 2020.

Featured image (top of the page): Mummy of a boy, early-second century, found in Thebes, Egypt