Space science covers everything from Earth's surface to the Sun and then out into the galaxy.

The range of space physics studied here is from Earth's ionosphere to the Sun's surface to the outer boundaries of the heliosphere and solar system, where the Sun's "solar wind" interacts with the local interstellar medium.

As such it includes the solar corona and solar wind (sometimes called the interplanetary medium), the ionospheres and magnetospheres of Earth and the other planets, and the "Space Weather" that results from interactions between the Sun and Earth.

It is also crucial for modern astrophysics, since space plasmas are the only extraterrestrial plasmas available for detailed in situ study and comparison of theory with data.

Plasma physics is the basic underlying sub-discipline of physics. The reason is that these regions all contain plasmas, the so-called "Fourth State of Matter", in which atoms are either partially or fully ionised into electrons and ions, thereby being strong influenced by electromagnetic waves and vice-versa.

These solar system phenomena all involve the production of energetic particles and radio emissions, with a focus on collective plasma physics. They include "individual" phenomena as well as "combined" phenomena that depend on several individual phenomena. Examples of the former include the acceleration and heating of charged particles by shock waves or in magnetic reconnection regions, the generation of waves and radio emissions by various mechanisms, and the development of burstiness. Examples of combined phenomena include radio emissions associated with solar activity and shocks in the interplanetary medium and outer heliosphere, since these involve both particle acceleration and generation of radiation. 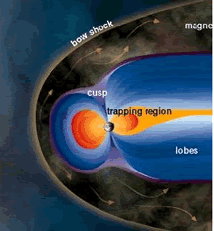 Schematic of the Earths magnetosphere showing the interaction of the Earth's atmosphere and solar wind generated from the Sun.

The continuous interaction of the solar wind with solar system bodies produces a standoff shock known as a bow shock at which incoming particles from the solar wind are promptly accelerated (see Fig. 1).

Consequently, the region immediately upstream of a bow shock, known as a foreshock, is a propitious site for energetic particle and plasma wave phenomena. Earth's foreshock is naturally the most accessible in the solar system and spacecraft observations over many decades have confirmed that it contains a rich variety of energetic, unstable electron distributions and plasma waves, including Langmuir waves and electromagnetic (radio) waves (see Fig. 2).

We have developed a quantitative model for the terrestrial foreshock radio emissions that takes into account electron acceleration at the bow shock, stochastic growth of Langmuir waves from unstable electron beam distributions, and nonlinear interactions between the Langmuir waves with other waves to produce the electromagnetic waves. Our results have been directly compared with data from the Geotail satellite currently orbiting Earth (see Fig. 3). 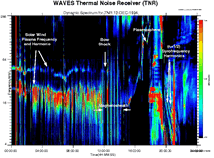 Figure 2. A dynamic spectrum obtained from a crossing of Earth's bow shock by the Wind spacecraft showing first and second harmonic radio emission in the foreshock region.

Figure 3. Theory vs. data comparison for terrestrial foreshock radio emission: the levels of second harmonic radio emission predicted by our model generally underpredict the observed levels by a factor of a few. Here, we show the predicted radio emission increased by 5dB (left panel) to better match the levels detected by the Geotail satellite (right panel).

Many space phenomena cause very strong electron heating, but the mechanisms are often either unknown, or not well understood. An example is the magnetic reconnection which occurs in solar flares (shown in the top figure) or in the earth's magnetosphere: a large proportion of the energy is released in the form of semirelativistic electron beams and heated plasma. One type of process which can produce electron acceleration is resonant wave-particle interaction:

Waves in the plasma are driven by spatial variations (e.g. in the magnetic field) or unstable particle distributions.

We are investigating this mechanism in various plasma configurations, comparing the results of observations and computationally intensive particle simulations against simple analytical results and quasilinear models (the lower figure shows the result of one such calculation).

Where these simplified models are valid, they allow considerable insight into the physical processes at work. These models also yield predictions in regimes where direct simulation is computationally infeasible. 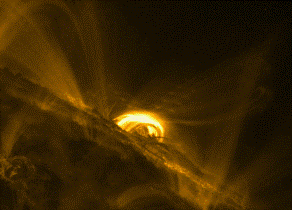 Figure 1. Magnetic field loops on the sun are heated during a solar flare (see bright yellow region) near the sun's limb. Data is from NASA's TRACE spacecraft. 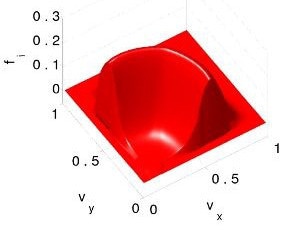 Figure 2. An ion beam interacts with low phase-speed waves, and begins to form a ring-like distribution.

Physics of the Outer Heliosphere

The outer heliosphere is the region at a large distance from the Sun where the interaction of the interstellar medium with the solar wind is important. Along with our international collaborators, we have developed a quantitative model for high intensity radio emission from the outer heliosphere. This model has produced and is still producing some very promising results.

We are also researching other important physical phenomena in the outer heliosphere, including the modification of the electron distribution due to interactions between electrons and lower-hybrid waves (the so called priming mechanism that involves lower-hybrid drive), the propagation of radiation from the interstellar medium to spacecraft in the solar wind, and changes in the magnetic field near the solar wind-interstellar medium boundary.

The Heliosphere showing the boundary of the ISM and the solar wind, the heliopause (HP), the termination shock (TS) and the bow shock (BS). The outer heliospheric radio emission source region is shaded.

Wave Growth as a Critical Phenomenon

The onset of a linear or nonlinear plasma instability has similarities to a phase change in a thermodynamic system: complicated dynamics gives way to dynamics dominated by order (e.g., by a single growing wave mode in the plasma case).

We apply techniques from the theory of critical phenomena to plasma instabilities, calculating quantities such as divergent correlation lengths and times near instability onset, critical exponents, and membership of universality classes. These provide new windows on instability physics, relating it to other branches of physics in ways not widely understood in the plasma community.

Iver Cairns is a named Co-Investigator on the STEREO Waves (SWAVES) instrument on the NASA's two Solar TErestrial RElations Observatory (STEREO) and Peter Robinson is an official member of the scientific team. The team is led by Jean-Louis Bougeret (Principal Investigator) and Mike Kaiser (Deputy Principal Investigator) and contains people from Australia, France, USA, and elsewhere. STEREO will perform the first stereoscopic studies of solar and interplanetary activity, with interest in the phenomena and underlying physics and the prediction of space weather events. SWAVES will study both remote radio pheonomena and in situ plasma waves. More information can be obtained from the webpages for STEREO itself and the SWAVES instrument.

Schematic of the STEREO mission: the two STEREO spacecraft, one in front and one behind Earth in its orbit, triangulate on a coronal mass ejection (CME) leaving the Sun. The SWAVES instrument uses the long wire antennas on each spacecraft to detect radio waves associated with the CME (type II bursts) and solar flares (type III bursts) and plasma waves generated locally to the spacecraft.

Low Frequency Demonstrator (LFD), Mileura Widefield Array (MWA) - This array of radio telescopes near Mileura in Westrn Australia will detect radio waves in the range 80 - 300 MHz, with emphases on heliospheric science (specifically solar activity and space weather), epoch of reionization (EOR) studies, and radio transients. Led by Masschusetts Institute of Technology (MIT), with members from the Center for Space Research and Haystack Observatory, the team includes collaborations with U. Sydney (Iver Cairns), various other Australian institutions (CSIRO's ATNF and U. Melbourne), and other international groups. The website is here.