Looking inside mummified cats, ibises and crocodiles
Share
We are documenting and investigating animal mummies using imaging techniques from the fields of nuclear science and medical research.

The Nicholson Collection contains 14 animal mummies from ancient Egypt, including cats, ibises and crocodiles. Using CT scanning, neutron tomography and photogrammetry, this research project looks inside these creatures' protective wrappings to uncover new insights into the role of animals in ancient Egyptian society.

Through this multi-imaging approach, we hope to find who, if anyone is inside each of the packages and potentially discover the cause of death, ancient species, mummification methodologies, and preservation state. These techniques will also help us develop new museum management strategies for exhibition display, storage and conservation. 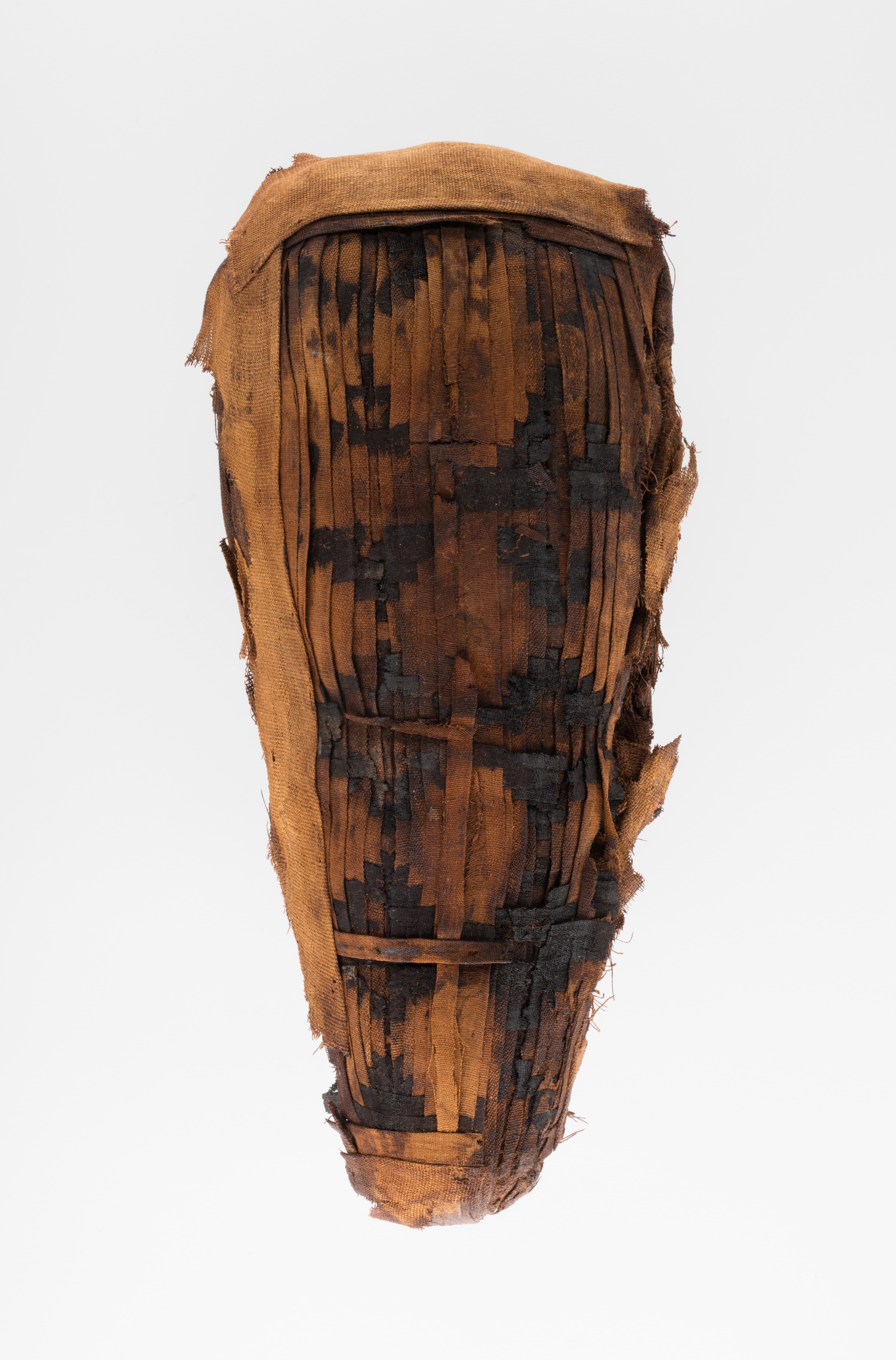 The Nicholson Collection includes four artefacts thought to be mummified ibises, including two linen-wrapped packages (NM62.584, NM62.585), one sealed ceramic jar (NMR.35) and the fragmentary remains from an opened ceramic jar (NMR.36.2). A further two ceramic jars (NM64.328, NM64.93), of unusual shape, have 'legacy data' (un-attributable commentary or data that may be erroneously linked with an artefact's record) which suggest they too may contain the remains of an ancient Egyptian ibis.

The wrapped linen packages were both acquired by the Nicholson Museum from the Egypt Exploration Society in 1914. They were found during the society's excavations at Abydos in 1913, where zoologist Leonard Loat discovered an ibis cemetery adjacent to the human cemeteries that were under investigation. In the first two seasons of excavations (1913–14), more than 150 ceramic jars and 2500 mummified ibises were uncovered, all dated to the Roman period. The two specimens sent to Sydney are decorated with geometric burnt and resin impregnated designs.

The sealed ceramic jar and its opened counterpart were both parts of Sir Charles Nicholson's founding donation of nearly 1500 ancient Egyptian, Greek and Italian artefacts. The cone-shaped ceramics are typical of the vessels used to pack and store mummified votive ibises when they were entombed in vaults, catacombs or cemeteries related to the temples where they were left as votive offerings. 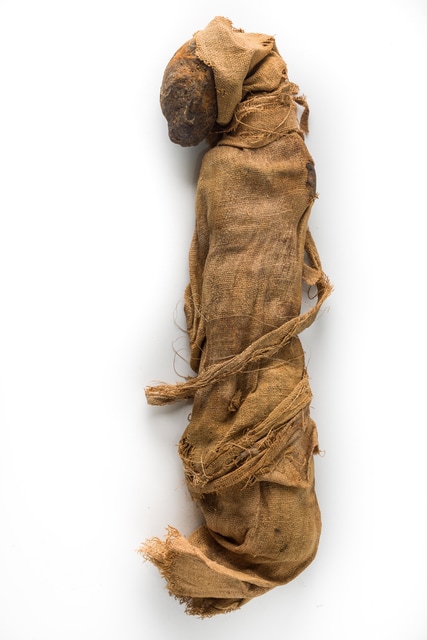 The Nicholson Collection includes five artefacts thought to be mummified cats. All are wrapped in linen bandages, however, they vary drastically in their size and wrapping techniques.

The two smallest wrapped packages, NM84.2 and NM84.3, were donated to the museum by Mrs Elwyn M Andrews and Miss Elizabeth C Bootle in memory of their great-uncle Sir Grafton Elliot Smith in 1984. Sir Grafton Elliot Smith was a pioneer in scientific investigations of Egyptian mummies and was one of the first people to use medical imagery (x-rays) to investigate mummified remains. He was also the first person to obtain his MD by examination from the University of Sydney School of Medicine. NM84.3 has previously undergone CT analysis in 2009, revealing the contents to be fragmentary disarticulated bones wrapped in the shape of a kitten.

NMR.30 is an adult cat, wrapped in very few bandages with the head of the animal exposed. Like two of the ibises, it was donated to the museum by Sir Charles Nicholson in 1860 and is part of the museum's founding collection.

A second more ornately wrapped cat, NM62.586, was acquired by the museum before 1962. It was the subject of a CT scan in 2009, which revealed that an adult cat was preserved in this package.

One of our most recent acquisitions was a mummified animal thought by the donor's family to be a cat. NM2017.262 was donated by Mrs ML (Molly) St Vincent Welch in memory of Lieutenant Colonel JB St Vincent Welch DSO (1881–1919) and Dr JB St Vincent Welch (1919–72) in 2017. Lt. Col. Welch served in the 1st Australian Field Ambulance to Egypt and Gallipoli, and commanded the 13th Australian Field Ambulance unit at the Somme, between 1914 and 1918. It is when he was stationed in Egypt that Welch collected a variety of ancient Egyptian artefacts and tourist souvenirs including the mummified 'cat'.

Three mummified baby crocodiles are also found within the Nicholson Collection. Two are partially wrapped in a single layer of woven linen bandages and the third is unwrapped.

The two partially wrapped specimens (NM52.406.1, NM52.406.2) were donated by Professor Richard Edwin Smith in 1952. A fragment of a baby crocodile skull (NM52.406.3) was also donated with these two items. However, due to the coverings it is not known if this head represents a third animal, or if it might join the wrapped specimen where only the tail is visible.

The unwrapped specimen NM84.4 was also part of Sir Grafton Elliot Smith's collection and donated by his grand-nieces in his honour in 1984.

The Animal Mummy Research Project is divided into several stages, focusing on one animal type at a time. The investigation is currently in Stage 1, analysing the ibises in the collection. This stage compiles several imaging data sets that will be used to test the validity of our approach to both known and unknown mummified remains and includes ceramic materials. Stage 2 will move on to investigate the cats in the collection, drawing on the expertise gained in Stage 1 of the process. Stage 3 will attempt to investigate the minimal crocodile specimens, for cross-disciplinary access to data within the University of Sydney. 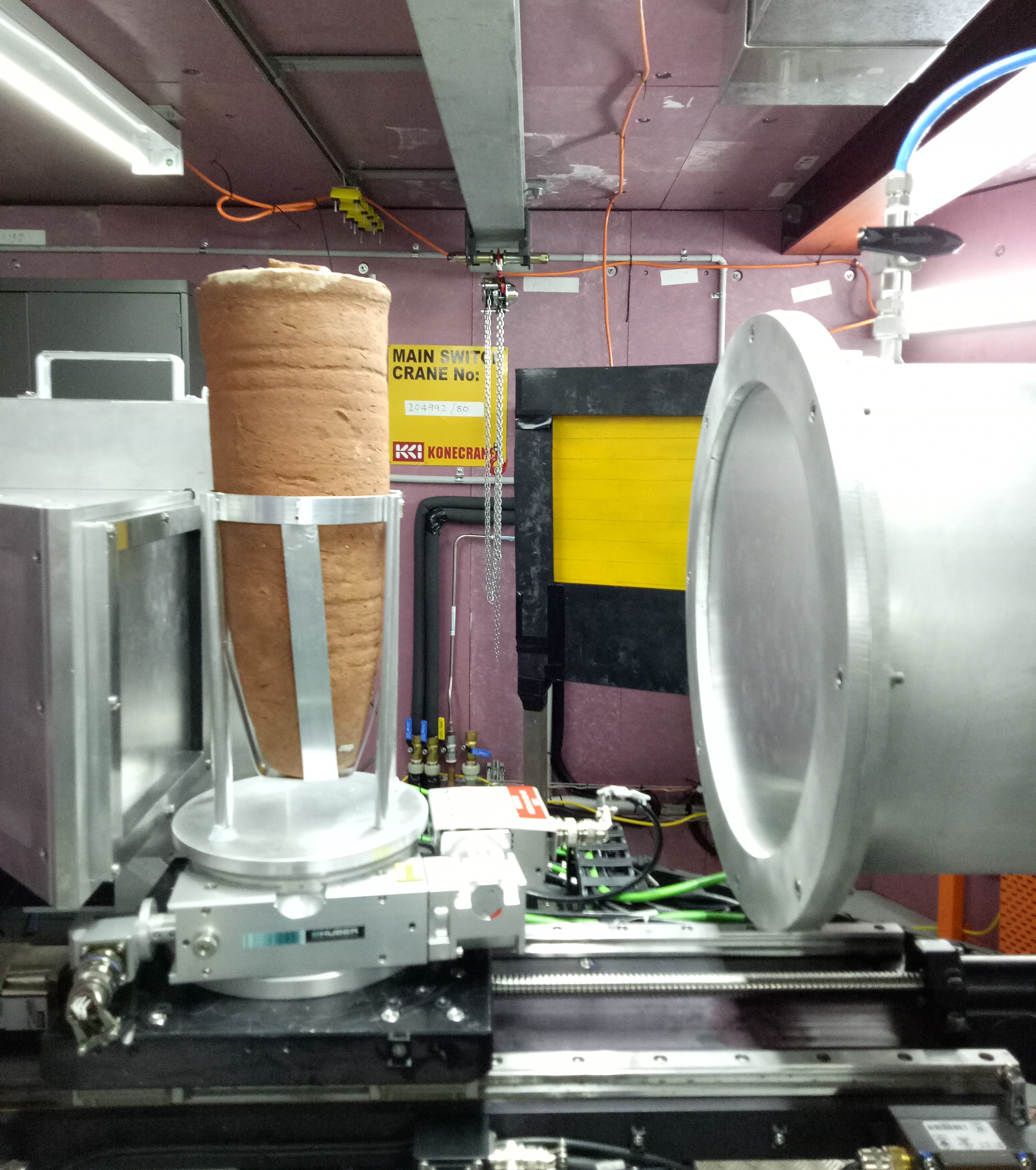 Ibis jar in position for scanning by DINGO, at ANSTO, Lucas Heights

Neutron radiography has traditionally been used for the imagining of metallic and ceramic materials. However, this research project sought to test the viability of neutron radiography in the analysis of mummified remains and ancient Egyptian ceramics.

The five specimens analysed included the two linen-wrapped packages, the sealed jar, and the two ceramic jars with mysterious data. The remains associated with the opened jar were not analysed using this technique due to their current state of preservation.

Initial results were extremely encouraging, including the quality of visualisation of the multiple layers of linen wrappings; the detection of feather 'impressions' on the exterior of the bird within one mummified package; the confirmation of a potential ancient 'fake' within a still-sealed jar from the ancient period; and the visual exclusion of two ceramics as containing animal remains.

In 2018, further sets of images of the ibis packages in the collection were obtained using more traditional CT scanning techniques (now routinely used for the analysis of mummified remains) by working with both the University Veterinary Teaching Hospital Sydney (UVTHS) and new Hybrid Theatre Unit.

Working with Senior Radiographer Helen Laurendet at UVTHS, the two linen-wrapped packages were analysed using a 16-slice CT scanner. Initial readings were encouraging. Clear images of the current state of bone structure of each of the birds inside the mummified packages confirmed that an adult ibis was wrapped inside one packet and that the other contained two juveniles.

Working with Zoe Williams and Veronika Tatarinoff at the Hybrid Theatre Unit, both the wrapped linen packages were scanned for a third time to compare different imaging techniques and enhanced visibility. In addition, CT scans were taken of the sealed jar and the fragmentary remains which were removed from the ibis jar sometime in the mid-1800s.

Once the imaging stages of the ibis investigation are completed, the different data sets will be merged for further analysis and will result in a multifaceted 3D model of each of the specimens. This will aid our scientific study and will be available for exhibition in the Chau Chak Wing Museum .

Votive mummies make up the largest category of objects we have from ancient Egypt and yet, have been one of the least researched until recently. They are a particular feature of the first millennium BCE, gaining great popularity in the Late Period, increasing even more so in the Ptolemaic and Roman Periods. In much the same way as conventional offerings for the gods, votive mummies were produced for a range of budgets, from wrapped figures with no decorative features for the poorer (or more frugal buyer) up to lavishly wrapped mummies complete with cartonnage masks which had been mummified using an array of expensive embalming products for wealthier members of society, or for particularly urgent or important requests.

The radiography and CT scanning examination of some mummies have been found to contain only part of a whole animal, or even no skeletal material at all. The reason for these 'fakes' cannot be confirmed; however, it is possible that they were another form of a less expensive offering. These may have been for members of society who did not have the means for a high-quality mummy, or that they were produced when few animals were available, using the idea that a part of the animal could represent the whole. Another theory is that priests made the 'fakes' to fool the cult participants.

Featured image (top of the page): a neutron tomography image created by Dr Floriana Salvemini, showing the inside of ibis package where two juveniles have been detected.